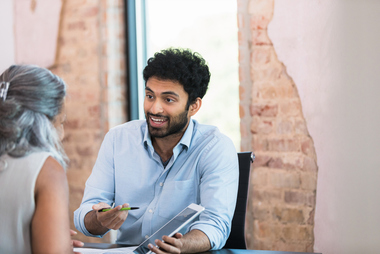 According to Hypercontext once more, it appears that “managers as a whole were more bullish on the positive impact one-on-ones were having on their team” than the employees were. So although you as a manager might believe that a one-on-one meeting unfolded successfully, your employees might not, which is a discrepancy worth addressing.

Inefficient one-on-ones will yield negative results that can manifest in unfavorable behaviors at work, like an increased number of absences, low productivity levels, or higher turnover rates. In order to combat these unwanted consequences, consider the following tips, which can help you make your one-on-one meetings more ideal for both you and your employees.

Prepare for the meetings ahead of time

Per the Harvard Business Review, it has been said that “one-on-one meetings with direct reports often feel more hurried and disorganized than they need to be.” One major way to prevent the one-on-one meetings that you conduct from feeling rushed is by planning ahead in advance of the meeting.

Instead of winging it and going with the flow during the meeting, try to implement the following habits:

When you understand how an inefficient meeting differs from an effective one-on-one, you can easily aim for the good and steer clear of the bad.

In the same Hypercontext survey quoted earlier, it was shown that managers and employees both consider the following signs good indicators of a successful one-on-one meeting:

On the other hand, both managers and employees have mentioned that these are indicative of poor or dissatisfactory one-on-one meetings:

One-on-one meetings are an unmatched opportunity for you and your employees to connect with one another on a professional yet in-depth level. Doing so will often boost the productivity levels and performance of your team as a whole, but especially individually.

Can Employers Ask Employees About Prescription Drug Use?